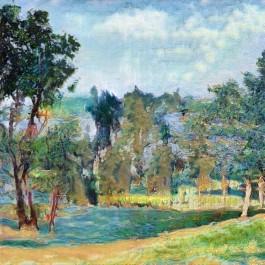 Currently there a two things that i want to understand deeply. One thing is the Blockchain Art Market. To take internet assets that have previously been infinitely copyable (songs, memes, etc) and turn them into provably rare, tradable blockchain assets is going to be a thing. A big thing. Because it so absolutely makes sense. And is much needed. Artists, buyers, collectors might agree on that. And there is something else. When german writer Christian Kracht held three lectures in Frankfurt recently it was not allowed to use smartphones to take pictures or videos. The talks were not recorded. This left an irritating but nonetheless ultimate transient fleeting taste that almost felt unreal but enchanting in an age of digital quasi-presence. Like an invisible wink or a whiff.

The other thing is more or less connected to the evolving art market. AI Art just got awesome writes Jason Bailey. He is talking about West Virginia Wunderkind Robbie Barat. I had the great pleasure to chitchat with Frieder Nake – best known internationally for his contributions to the earliest manifestations of computer art – and i am pretty sure that Robbie Barat can and will achieve with AI what Nake and other have done with writing "computer programs to automatically generate drawings of an aesthetic quality and without other (technical or economic) purposes." 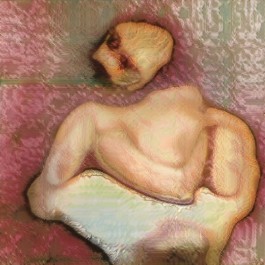 SuperRare is a platform "for your crypto-collecting pleasure". It is online since April 17. Here is an interview with the two founders. The best artworks on SuperRare are by Barrat.

Barrat, a 17-year-old who stresses that he’s growing up on a rural farm in West Virginia away from anything resembling a tech hub, taught himself how to code and build AI programs using entirely open-source software.

His laptop runs Linux, an open-source operating system preferred by coders for its versatility, and he uses open-source machine learning library PyBrain to train his neural networks (though he’s figuring out how to use Google’s open-source TensorFlow). He’s read open-source textbooks.

These days Barrat is working in a research lab at Stanford (*) and he just published a Bloomberg Businessweek cover. 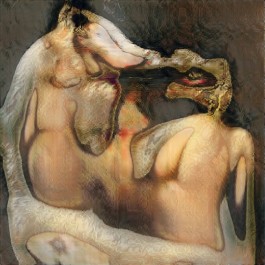 He compares his role to the role of artist Sol Lewitt   (*)

Okay, but what about the surrounding Blockchain Art Market. Here is a bunch of people who can talk about the topic. Jess Houlgrave sticks out. Twitter. Medium. What about mainstream media? The New York Times just featured CrytoKitty a couple of days ago. Fastcodesign on Barrat. Artnetnews with some background info last year: AI-Generated Art Now Looks More Convincingly Human Than Work at Art Basel, Study Says. And this is a funny headline: Why One Collector Bought a Work of Art Made by Artificial Intelligence—and Is Open to Acquiring More.

Artnome is a greatplace and the podcast seems to be worth a listen too. I will comeback here and add stuff whenever i 1) have managed to buy a decent amount of cryptocurrency – not yet enough but done √ 2) bought an actual piece of digital art 3) found another crucial link.

All emojis that Barrat uses in his twitter bio.

And now? How I became Leonardo da Vinci on the Blockchain