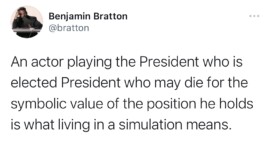 "Experiencing Russia's invasion of Ukraine via social media ... has been a dizzying mix of incomprehensible horror and extremely dumb posts. As social media manager Moh Kloub tweeted on Wednesday, 'Twitter feels especially dystopian on nights like this. Tweets about war mixed in with sports, memes, etc., like it’s all of the same importance. Don’t think we were meant to absorb info like this.'"

13 hours ago Ryan Broderick wrote this in his newsletter Garbage Day: Everything will be all the time and everywhere. He pins down a feeling experienced by probably all users trying to get information about the current #Ukraine situation on social media. 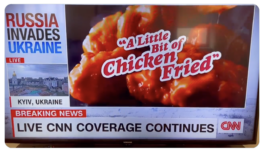 I saw the headline "Context Collapse" over on Dirt. And even though i have other thoughts on this Applebee-example – to me this rather represents the "good old times" aka late 20st century (The end of history anyone?!) when you could have a misplaced TV ad but not much more to arouse – i felt seen, because the word seemed to perfectly describe what i have experienced swiping through TikTok for way too long in the last days. 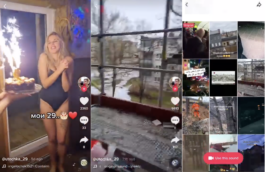 To me context collapse is seeing a girl on her birthday party, swiping into a war-like situation (her next video) only to find out that she lives in Lithuania and has – like many others – manipulated her video by using someone else's sound.

It might just be the internalized cultural technique on the platform. You use someone else's sound and do mimic someone else's movements for taking part in nearly every challenge on TikTok to express yourself and belong. Crucial in an extraordinary situation like this, but of course not particularly helpful for people looking for actual news.

„It seems that the platform’s design is incompatible with the needs of the current moment.“, writes Abbie Richards. While this is particularly true for TikTok it is obvioulsy not better on other platforms argues Ryan Broderick (mentioned above).

"It seems clear that our feeds aren’t meant for content like this and are breaking. Memes are colliding with conspiracy theories and fake war footage posted by former meme accounts. Programmatic ads are appearing next to gruesome photos of the dead or Russian propaganda. Our current information landscape was created by American companies and was meant to algorithmically shield its users and, more importantly, brands in walled gardens, safe from the realities of proxy wars fought in far-off places, not a land war in Europe. Bloated and broken capitalist social media platforms run by Silicon Valley monopolies, creaking with age at this point, now have to respond to what could be the first battles of a much bigger war. And, if the last 24 hours are any indication, they are simply not up to the task."

Claire Wardle and Hossein Derakhshan have introduced the term Information Disorder in 2017. They distinguish dis-, mis-, and malinformation with disinformation turning into misinformation when content starts getting shared. For a start it is helpful to remind ourselves that "the sharing of misinformation is driven by socio-psychological factors. Online, people perform their identities. They want to feel connected to their ‘‘tribe,” whether that means members of the same political party, parents who don’t vaccinate their children, activists concerned about climate change, or those who belong to a certain religion, race or ethnic group."

We are currently experiencing information disorder. The situation is crowded, complicated and barely comprehensible right now. Context collapses. It is war.