Over the course of the year i have been playing around with a couple of apps that promise to let you augmented the real reality on your phone.

At the beginning of the year, in march to be precise, i got hooked on the whole mobile AR topic. Before ARKit and ARCore i wrote a bunch of lines on the importance (and so forth) and started to fiddle around with Augment – a mobile app that lets you visualize your 3D models in Augmented Reality, integrated in real time in their actual size and environment. Well, actually i played around with the integrated examples in order to place a can of Pepsi in the middle of the air. 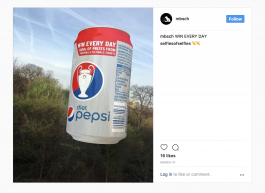 Fiona told me about Augment. She has been extensively working with it in order to produce her solo show Tracker at Exgirlfriend Gallery.

While i was hanging out at a hotel in Vienna during a summer workshop i produced this silly zombie video using Holo. Holo lets you add holograms of real people and animals into your world and take photos & videos to share with friends. Apart from being stupid the technology is quite stunning if you imagine producing a holographic video of yourself in order to place an tag it at some random place in order to be watched by your ancestors using e.g. the invisible selfie stick or better the piece of cord.

During another workshop, this time strolling around the catacombs of Deutsche Welle in Bonn i tried out Paint Space. Paint Space lets you draw in the air with all sorts of brushes and colors. This was just a little experiment that took 5 minutes to produce using Luma Fusion to edit, but i am curious to see more advanced and vivid usage of stuff like that.

I saw Marc Settle from the BBC playing around with AR Placer Cam and bought it for 1,09 Euro because quote: Creating tracked text in Augmented Reality for your videos has never been as fun, quick, or easy. Basically this app does what Snapchat announced month ago: 3D-text to be placed in the environment next to you. I could not help but think about John Carpenters film "They Live" and the sunglasses. So  i had to produce this tiny "Obey"-clip while conducting yet another mobile workshop. This time at the WDR in Cologne.

I am curious to see what kind of apps we will use throughout 2018. After these very little and very first exercises we all should find out ways how to make useful stuff with it. I am expecially curious on how to use AR in the context of (location-based) journalism or in order to convey infos in the context of cultural heritage or other.

We are still stuck in the first wave of augmented reality

Especially because we still seem to be stuck to the so called first wave of augmented reality, that means simple overlays without a deeper spatial understanding or deeper intelligence of our environment. Necessary in order to provide meaningful contextual information. For further debate check out: Augmented Human – How technology is shaping the new reality von Helen Papagiannis (*).

While being in London for the weekend recently i wondered why there is still no seamless integration of additional AR info in the camera-app. I would have loved to point the camera towards several buildings just to get some actual information or at least a name of the building. Finally it is the 21st century after all, right?!