After a general take on spatial computing 2019 here are my thoughts about AR/VR and more in the context of cultural institutions and museums.

For the last 50 years the definition of what a museum is was quite clear. Revolving around acquiring, conserving, researching and exhibiting the “tangible and intangible heritage of humanity and its environment for the purposes of education, study and enjoyment.” This definition is currently discussed and will probably be adjusted to better suit the situation in the beginning of the 21st century.

Apart from that museum spaces and cultural institutions have been embracing new means of technology in the last decades. Some more, some less. But as long as for example AR has been around, there have been ideas on how to put it to use in the context of museums. I found a bunch of mostly marker-based AR applications on this german website for example dating back to 2010.

In 2019 the entire game speeded up a bit. There were endless articles with the usual army of buzzwords ranging from immersive, emerging to new richness or transformation and innovation. Of course there was storytelling. All this in the context of questions like: Is Art Museum Attendance Declining Across the US?

I got intrigued by the topic in January 2016 out of two reasons: one was seeing Adolph Hitlers office table crammed in a niche in the Deutsches Historisches Museum in Berlin as another dead object, two was watching the near future tv series Extant with an elephant hologram suddenly running towards a group of kids. Both got me thinking. You can read about that in german over here.

I collected a bunch of links from 2019 and will present them in a structured approach using chapters or hashtags. I am well aware that some examples do fit in several categories. Of course this list is absolutely incomplete. It is supposed to be the start of an ongoing investigation. I will focus on the usage of Augmented Reality. Of course there will be grains of project mapping, machine learning, CAVE and probably other things involved. I am more intrigued by the overall quality of a project than by technological category definitions. By the way i am not very intrigued by new way finding apps. Tour the Kennedy Center, now new with AR. Not that thrilling to me.

As if an artwork from the 13th to the 18th century was not enough, with AR you put an artwork to life (Zhejiang University Museum of Art and Architecture), can unveil hidden features (Hidden Florence 3D), tell new stories (Spark AR Tate) enhance it with augmented reality overlays (Museum AR) e.g. X-Ray, Animations, Annotations, and more (Gemäldegalerie Berlin), step inside the painting (Art museum Helsinki), you can remix (ReBlink Ontario), virtually destroy (Graffiti with Mark AR) it or put in on your own walls back at home. Why? In order to attract or entertain new audiences. Who seem overwhelmed, bored, alienated or not capable of grasping the analog sensation any more. AR can add value. Why read a catalogue when the info is augmented right next or directly onto the artwork?!

For the time being, we will only be able to experience animated 3D animals via mobile AR, that means using a tablet or a phone, or bigger HMDs (Destination Mars, NASA). Unless we have comfortable light glasses this will either be not very immersive or only possible due to clumsy hardware. Nevertheless voice-driven AR experiences and clever combinations of AR and project mapping or large screens make it possible to built intriguing applications. And sometimes it may be enough to bring skeletons from 1881 to life using a simple 3D model: Smithsonian's National Museum of Natural History.

Museums are buildings. Made of brick, mortar, concrete, glass and stuff. The notion of architecture is currently changing because in a mixed reality scenario you are able to easily remix notions of space. The mumok, a museum of modern art located in the Museumsquartier in Vienna, Austria for example wants to surpass the limits of the physical world by attaching interactive digital content directly to the building structure itself. The intention: attracting new museum visitors and informing frequent museum-goers.

Another approach has been taken by artist Damkanski. He just set up an unauthorized gallery called MoMAR that lives inside the recently-reopened museum from which it derives its name: "For its third iteration the MoMAR curators wanted to push the boundaries of the museum further, digitally intervening into the museum’s architecture more directly. Manuel Rossner’s contribution, Reef, reconfigures the room it “sits” in. The German artist, who primarily works in virtual reality, has created a colorful cavern that expands beyond the gallery’s wall. Rather than simply replacing a painting, it cannibalizes it, and in turn considers what environments—physical or digital—might be made within the white-walled constraints of the museum." Or what about using AR to reclaim history with site-specific context. Or: Artists reclaim sites using AR.

And do you need an anlog building at all to consume art in the 21st century? The Canadian Museum for Human Rights has an immersive experience that can also be enjoyed by anyone in the world, by downloading the museum’s new app to a phone or a tablet. The Museum of Other Realities or places like Radiance demonstrate new ways of producing, consuming and probably buying art in the 21st century. People with money and power try hard to dig into that space. Interesting to see this scene evolve. Meanwhile check the embodied cognition debate and have fun with hyperbolic spaces.

Singapore’s National Museum has an incredibly immersive and colourful exhibition – Story of the Forest – where an animated display of a forest scene is projected from the screens, inviting the viewer to spot various animals in the foreground and background. In the main dome area of the exhibit you can lie down and take in a breath-taking view of the ceiling that features cascading spores and plants. I have not been there but the video looks stunning.

Coming from a game background i can directly see how to enhance visual appealing places like that very easily. There are some examples that bring play into the context of museums. A topic on its own. I recommend to check out the work of the London based studio Preloaded. And i found a game that is obviously combing AR and more in the MANN-Museo Archeologico Nazionale in Naples.

The new intersection of analog and digital realities needs further investigation. It will change how we interpret and interact with objects, places and people. And it will fundamentally change how we engage with historical artifacts or artworks in the future. We need to get a new literacy concerning 3D, interaction design, game mechanics and architecture in order to produce and provide valuable experiences for future generations.

Here are some resources for further engagement 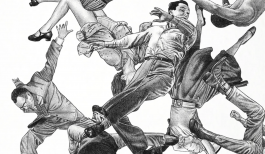 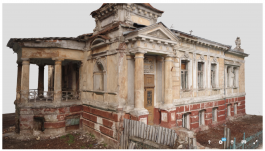 My general overview of
Spatial Computing 2019 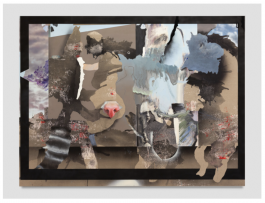 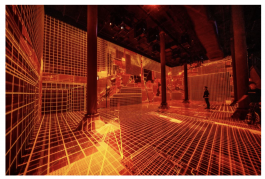 Hyperallergic is a leading voice in contemporary perspectives on art, culture, and more