16 years ago – when I was spending some time in the YMCA, Cambridge UK –  i took a Sony Handycam DCR-PC9E Camcorder in order to take a lot of photos while using the stairs. After that i produced a GIF and uploaded it to my website via FTP. A hell lot of work. And unfortunately the webarchive has only started taking random shots of my site in 2004.

16 minutes ago, I stumbled trough my hotel room in Yangon, Myanmar with my iPhone X, starring at the screen, trying hard to follow the TORCH tutorial in order to produce a mobile AR wayfinding experience.

16 hours ago i saw two tweets. One was actually pointing to a BBC radio show that was all about „Is VR Dying“ with Catherine Allen actually „Defending VR“ while Susanne Dickel was all about „VR has finally arrived“ while talking about VR experiences being shown at the DOK Leipzig. I produced a quick interactive 360 story today with our tool Fader – took me less than an hour in total.

You have heard this one before. On various occasions. When things are proclaimed to be dead or to have finally arrived at the same time. You know: Stuff is happening. As always: the future is here — it's just not very evenly distributed. I think I could feel some future when I checked out this way finding demo. I can totally see that working on some light wearable devices. You will so totally get used to that you will think how did I manage to live without that. There will be an AR version of Zombies, Run soon. That is for sure.

Paul Reynolds, CEO and Co-founder at Torch seems to be one of the people to follow in the coming months. He has an impressive background. After 10 years of creating video games, Paul joined Magic Leap where he was a Senior Director, overseeing content and SDK teams. In 2016 Paul moved to Portland, OR where a year later he founded Torch, a prototyping, content creations, and collaboration platform for the AR and VR cloud. A background in gaming always helps when it comes to 3D and spatial things.

Just like Matt Miesnieks  from https://6d.ai/ he is all about doing and writing about it. And that is very helpful. Like: Google’s AR Design Guidelines suffice while Apple’s fall short or Designing in the Wild West.

In 2015 Mike Alger published a paper on Visual Design Methods for Virtual Reality. Gladly I have a PDF version of that on my computer. I think it was taken down when Mike joined Google two month after having published it. Back then it was all about 3D UI and Interaction.

Things have become more advanced since we co computing in the camera. And as Paul writes: Both sets of guidelines (Google & Apple) {on AR} lack any mention of multi-scene use cases, which automatically excludes many modes of interactivity or conditional behavior that leads to transitions, complex or more interesting changes of state, personalization, and ultimately a deeper, more immersive experience. Similarly, there is no discussion of animations, either triggered or timed, or the notion of a shared or collaborative environment, etc. 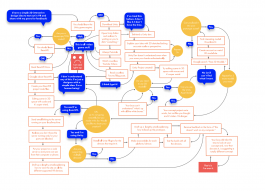 16 months from now there will be people defending AR or probably proclaiming it dead. But there will be way more experiments, examples and experiences to built up on. Even so i found a series of images from kids wearing Mixed Reality devices rather unsettling it is totally clear to me, that there will be a new generation that will know laptops and PCs only from museums. A generation that will see smartphones as devices from the past. Even if that may take longer than 16 years.

Meanwhile there are a lot of things to tackle. Just forget about the screen for a second. Think about context, simplicity, the users line of sight and oh so many things. Rather than relying on a technical solution I want to dig deeper into a possible content driven framework for telling stories, solving problems and transferring knowledge. So back to Torch then I guess.

Especially after having read this take on Magic Leap, including the great quote: Magic Leap is almost entirely built on the visions of grown men wanting to immerse themselves in fantasy worlds. There is more to life than this of course. And then there is Mica: Being provoked by a lifelike digital avatar in a real human space was a genuinely novel sensation, and the interaction felt emotionally charged and raw, a shot across the uncanny valley.