There are a lot of ideas floating around. Ideas about the soon and not so soon to be future of technology and information and communication, etc. This very idea and the concept behind it really got my head spinning.

That is because it sounds so simple, huge and all-embracing. At the same time it sounds like the natural advancement of the way information is organized these days. It might be the most important software infrastructure in computing. In fact it makes sound Google´s premise to „organize the world’s information and make it universally accessible and useful“ like a somewhat accomplished goal from the past, from the era of the web where hyperlinks got us freaking out. 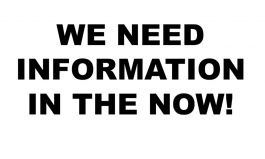 The AR Cloud – a persistent 3D digital copy of the real world, a shared “soft-copy” of the world could or let’s say will change that. It could organize the world’s information visually, and “in situ,” meaning where items actually are. (*) – Think of humanity’s knowledge made accessible at a glance. Knowledge organized at its origin. And of course way better consumed with a pair of glasses rather than you mobile phone.

The AR Cloud is a continuously generated and updated online 3D open-world-like map that resembles the exact location of anything around us, including objects and terrain formations of the real world, like a 3D scan of everything around us. (*)

Yes it is "really, really early in that process“ and there is an endless list of practical problems. For instance a hell lot of technical stuff. One problem: persistence. The world around us changes every single second. The AR Cloud requires constant updating to make the shared online spatial map updated. We need persistence in AR that ensures that any virtual object that introduced into the AR scene, will stay there when I come back. Unless it was removed or moved for any reason by the app or by the users themselves. We need persistence across space, time and devices.

A use case: „For instance, say you go to a restaurant. The restaurant owns that space, so it owns the AR experience, and when you enter your AR glasses or contacts automatically adjust to see what the restaurant wants to show you. That could be virtual menus on the wall, or dietary information popping out of the food. Whatever it is, it could be the default view in that restaurant for normal people. However, say a firefighter walks into the restaurant, they'd be treated to the view of emergency personnel, which would point out fire exits and extinguishers“ (*)

AR Cloud seems to be the next big evolution of Augmented Reality. With a vibrant start-up community and a lot of stuff going on these days. Let’s see how the idea evolves during the next month and years…

The AR Cloud is Making it Rain!
The Search Engine Of AR
Introduction to the AR Cloud (took some screenshots here)

Voices of VR Podcast #643: Matt Miesnieks on the State of the AR Ecosystem

Building an AR Cloud: A Conversation with 6D.ai