Skip the first paragraph if you are not into whining and want to cut straight to the meat.

Two days after having watched a nifty little presentation about the current state of AR in 2020 by one of my favourite studios Preloaded a sudden rush of deep web nostalgia occured to me. I was not able to remember the name of Russel Davies. It took ages (well in fact 5 minutes) and a bunch of reference points to finally find his name (Russel Davies that is), his website and his fairly new newsletter (Afternoon Slow). On my way i saw that the Really Interesting Group from London (James Bridle was part of it) has vanished from the Internet. And so has BERG, a London based studio that did nice stuff roughly ten years ago. Farewell. In the next 5 minutes afterwards i learned that Russel is into knitting and found a bunch of songs currently playing on this machine. A nice remix of Manila, Seelenluft (2002) and a Steve Reich edit by HNNY (2013). Today (2020) Twitter is all humming about eye mouth eye, Insta started Reels and Snapchat is doing pretty good after the Snap Partner Summit and Alphabet just acquired Focals Maker North.

AR, AR, AR. When will it be here. For all of us to see. And use. And finally refuse. Well. We are in it for the long run. Before you present the sunday rost, you make sure that you have a kitchen and all the stuff you need. Buy a knife and an oven, set the table, wait for a moment before you open the door and put the beast on the table. Apples Glasses will take some more time while Apple and others are preparing the entire ecosystem. For instance Apple´s design overhaul is all about preparing for Augmented Reality, writes Lucas Rizzotto.

Okay, back to the Preloaded presentation i wanted to talk about. Right at the start Phil (Creative Director) and James (Head of Design) distinguish the three major platforms of 2020: Web, Mobile and Headsets. Of course it is necessary to understand what you can do, what you need on a technical level and who your target audience is. For a start it is quite cool to blend a simple AR object into your "normal" experience browsing the web. If it adds value that is.

Mobile AR experiences and their user experience differ drastically. While it might be fun playing Pokemon Go i personally think that it is a pain in the arse to "play" Pokemon Smile – an app that is supposed to gamify cleaning your teeth or the teeth of your kids. 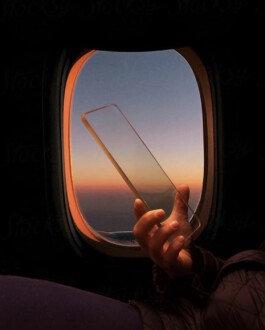 It just does not work – at least for me - to concentrate on cleaning the teeth while holding a phone in selfie-mode balancing a virtual Pokémon on my head, making sure to check the right area of cleaning while rescuing Pokémon that have been captured by cavity-causing bacteria. Maybe it is just me. But holding the phone while your kid is playing in front of it does not work for me either. Doing that with glasses might be pure bliss. The user scenario and the form of interaction and the metaphor of your phone as an enhancing glass of wonder compared to a magic mirror is just completely different. 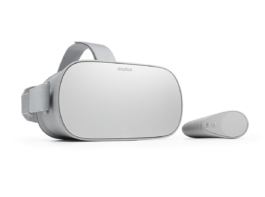 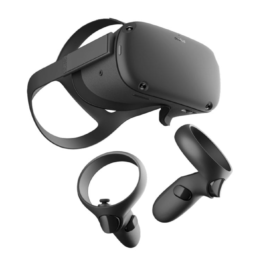 Yes, these are VR HMDs

THE AGE OF CONTEXT

A useful and obvious distinction is to talk about who and what and where you are trying to augment. You might have seen AR Copy and Paste, be familiar with the fast evolving field of face, foot or body filters and of course spatial context making use of an AR cloud solution or scanned surroundings (LIDAR) is pretty mindblowing when you start thinking about possible use cases. I for one are still intrigued by speculative architecture.

This one is real, waiting for some XR

So what can we do with all that fancy technology besides turning ourselves into potato heads. We are still trying to figure that out. Here are random snippets and thoughts: The other day in the supermarket i had to think about Dent Reality. They are mentioned in the presentation offering individual indoor maps. Whatever. They did not sell paneer at the supermarket with or without AR. I have never been to Disneyland. But whenever i go i want XR big time. Umberto Ecco. Make sure to read Travels in Hyperreality before ever going to Disneyland. It adds perspective and a historical lens. I really liked some of IKEA´s recent AR experiments. 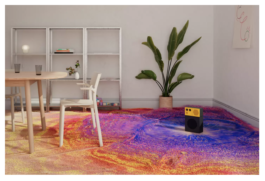 Just started to think about Winamp in the late 1990s. Have a look over here, come back and just imagine an augmented music scenario pouring over your entire surrounding. No drugs needed anymore.

This is going to be pretty wild. At least in my imagination. Besides that there is so much useful information waiting to be digitally augmented at the exact right place and time when you need it even though you probably did not even know that you needed it. Just think about helmets for motorcycles. Of course you will be able to learn minigolf (at last) way faster or know more about the building or person (Face Screaming in Fear emoji) opposite to you.

Another Preloaded presentation screenshot i hope you do not mind

Having played around a bit combining AR and ML (Explainar) and using natural inputs in the context of VR (VRΩ), having seen the advancements concerning ARKit and ARCore and the development of WebXR, having worked on a framework for CGI based 3D web experiences (XRDOK), and having played around with A LOT of lenses and filters and apps, especially in the context of AR journalism and in museums i am still excited about the next steps of spatial computing towards the Metaverse or however you want to call the new thingy.